I first started training properly towards this race after volunteering on the same weekend last year. I was one of 6 Marshalls at one of the checkpoints from 3:30pm until 5:15am. One of the main things I remember about this time was how steadfast some of the runners were, some were cutting it very close to missing cutoffs towards the end of my shift and simply weren’t going to bow out of the race on their own terms.

I learnt a lot from Lou who seemed to really enjoy the tribal element of lightly abusing people in Bad Boy Running gear (one of their slogans is ‘Fuck You Buddy’), she was very knowledgeable about the course and was able to be a constantly positive influence on the runners. The rest of the team were great as well and we managed to keep each others spirits up despite really bad weather during the night after some pleasant weather earlier in the day before our shift had started. 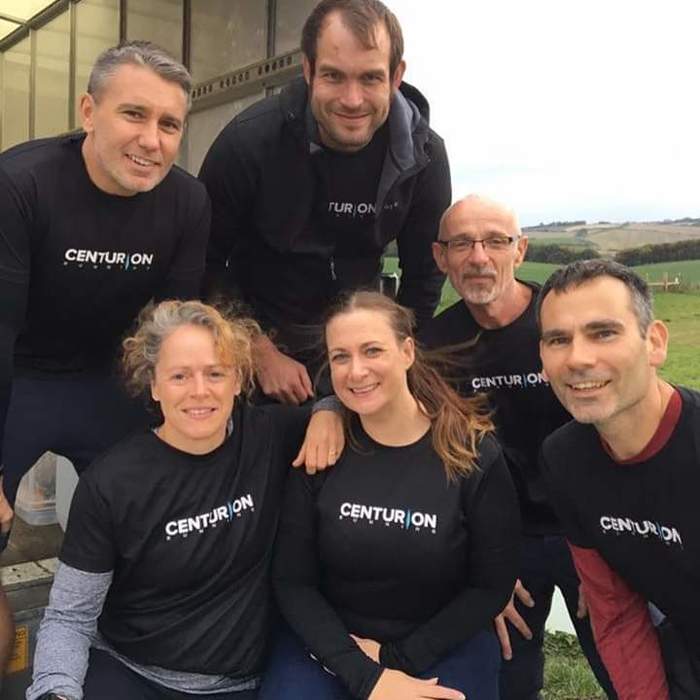 The weather in this photo was a drastic contrast to what this year’s event had in store for me during daylight hours. I made the mistake of setting off in road shoes for the first section and was skating all over the place on waterlogged paths, it was simultaneously too warm for my waterproof jacket and too wet to soak my running shirt this early in the race with no guarantee the weather would subside enough for it to dry! I was able to maintain a sensible pace for the first section to CP1 but got caught up in conversation with another Dragon’s Back volunteer Tania, who was running at a slightly faster pace than me. I fell into running her race instead of mine for a while then held back, conscious of still having 75 miles to go after the first out and back was completed.

I was able to change out of my shoes into a trail pair at 25 miles and found the grip infinitely better once I was back on wet grass. I also messaged my pacer Kate to see if she could get my Primaloft jacket from my car when she arrived before we needed to set off.

I had agreed with Kate that I needed to be within 11 hours at halfway for a sub 24 hour finish to be possible. My plan had been to run the first 25 in around 5 hours then about an hour slower for the second leg. I was able to bury my ego and walk some of the longer climbs on leg 2. The toughest part of the race was always going to be somewhere in the middle 50 and I needed to make sure I ‘kept some of my powder dry’ for the 50-75 leg.

I was able to run downhill at a reasonable pace on the way back to the village hall. I had convinced myself this was me falling forwards and not over exerting on a stupidly easy part of the course to make that mistake!

This was the first time I have ever had a pacer of my own for running. I’ve fallen behind 1:30 half marathon and 3:30 marathon pacers in shorter distances, but this was serving a very different purpose. I’ve known Kate for around 2 years and she is one of the most stubborn and resilient people I’ve ever been around. I asked her over a year ago to pace this race and she had kept tabs on my training since then so wasn’t going to let me ruin my hopes of a sub 24 finish on her watch! 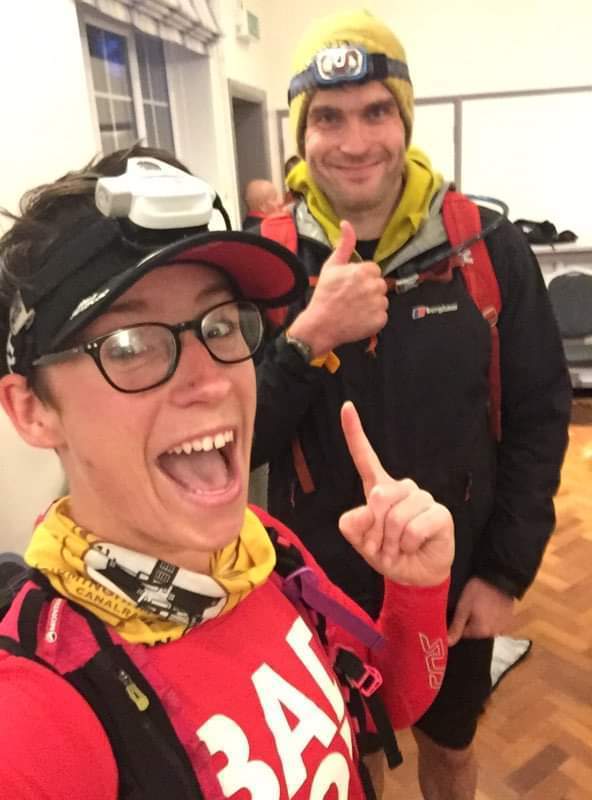 My legs started to cramp really badly on the outward leg towards the next checkpoint, Kate insisted I slow to a walking pace when this happened and not jolt to a instant switch as this was worse for my muscles. I was only able to run for a few minutes at a time for most of the way towards 62.5 miles. Kate made sure these were constant with only very short walking breaks in between. We had some beer at this checkpoint which was incredible. I also managed to beg some salt tablets from another runner which boosted my spirits considerably! 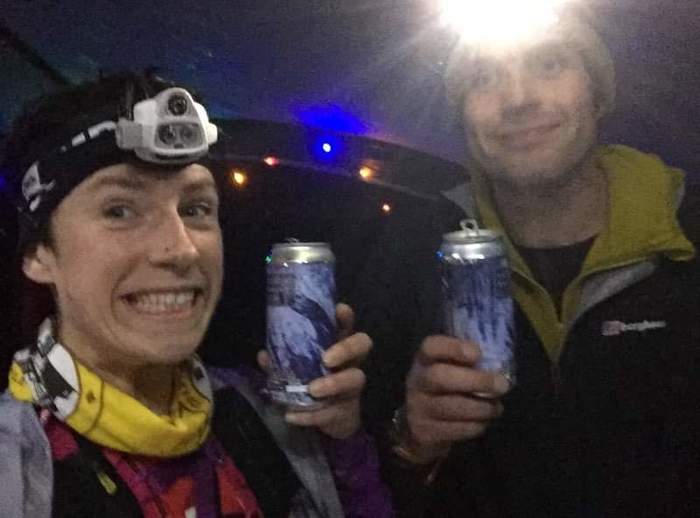 I’ve usually been able to ensure I eat at every checkpoint and take on board sufficient fluids. Kate was keen to take these responsibilities out of my hands from this point. She would only let me fill my 3L water bladder half way to keep the weight of my pack down and would direct me towards the saltier end of the buffet tables at checkpoints, marmite wraps and crisps were all I had coming to me apparently! I was willing to forgo chocolate and trust her judgment about 1.5kg of weight from the extra fluids in my pack making a difference on the back of a 100kg runner.

The salt tablets eventually kicked in and I was able to run for longer sections even if it was at around 15 minute mile pace. We reached the 75 mile mark around 1am and I was reasonably confident I could get under 24 hours within the 8 hour window Kate had worked us into having for the last leg.

The rain was constant and I convinced myself I needed to run most of the last leg to ensure I kept warm enough throughout the coldest part of the night. Me and Kate had another beer at 87.5 miles which at 6.8% was good but didn’t taste as strong as I was hoping it would!

I got some light hearted abuse from one of the checkpoint volunteers asking what I was doing sitting down, when I replied I was waiting for Kate to finish her beer, Kate chimed in with that she had ‘worked fucking hard to build us this buffer for the last 12.5 miles home!’

The last section will forever live in my memory as the first time I have hallucinated during a race. I know there was a section with a white fence, but whenever I thought I saw it on the horizon, runners with headtorches would run through it coming towards me, and once they were past me, the fucking fence would appear again!

I was lucky it got light when it did as my 2nd head torch was running low on light, I didn’t even fill up my water bladder with 4 miles to go. I was quite happy Kate would kick me along for the worst case scenario, last hour and a half or so.

It was a great feeling standing on the finish mat and seeing the clock still being under 24 hours. I had 4 people waiting at the finish to see me and I really enjoyed hugging all of them. My wife Helen had managed about 4 hours of sleep and only convinced herself I would finish after I messaged her at 75 miles saying I was OK. My mother in law Angela and auntie Grace were both worried about me finishing as well. Kate had messaged Helen that I was struggling with cramps during the night and the 3 of them knew that could possibly have ended my race. My cousin Kerry had also travelled down to see me finish. It was one of the highlights of the Great Glen race last year getting messages of encouragement from her on Facebook Messenger from Australia so having her able to be there in person at the end of this race was a very special feeling.

We had breakfast back at the hotel and Helen had to take my shoes and socks off for me before I hobbled into the shower for a hosepipe-like wash to get the mud off. I like to think I have a high pain threshold but a free falling shower was unthinkable with the amount of areas suffering with sweat rash and chafing!

Kate joined us for Sunday lunch after I got about 75 mins of sleep and it was a lot easier to force down a large plate of food than my previous attempt with breakfast around 3 hours earlier. I felt I could contribute to conversation a bit more and wasn’t purely thinking of sleep!

After saying goodbyes to Kate, Grace and Kerry, I managed a bit more sleep interspersed with terrible Sunday evening terrestrial TV in the hotel. Angela gave me and Helen a lift back to our car the next morning and I gingerly managed the drive back to Manchester using my hands to lift my legs for braking and changing gears!

I’m so happy I managed to drag myself through the 50-75 mile leg with Kate’s support, I don’t think the mindset I had for any of the races I’ve done previously would have got me through it without her words of encouragement. The 2021 goal of running the Dragon’s Back Race still seems daunting in comparison to last weekend but if I can follow this approach I think I can give a good account of myself when it comes around. 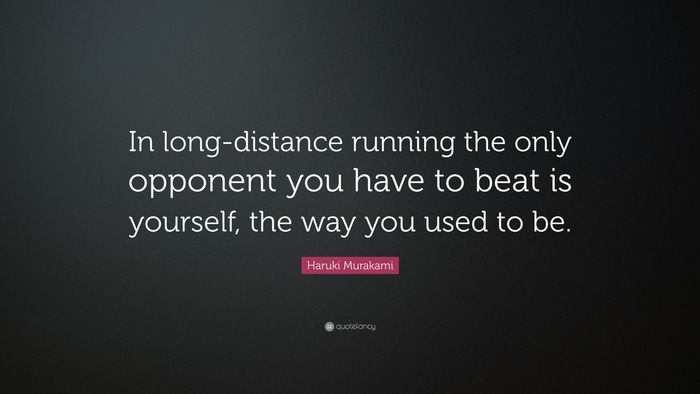 2 weeks to go, 21.6 miles and a niggling cut reducing my weekly total

This week was quite disappointing as I had anticipated doing 35-40 miles and ended up being nowhere near that. I had a difficult time finding free time to go out before Thursday so started my running week with 5.4 miles that evening. I... Continue →