My final training runs this week were 4 mile outings on Tuesday and Thursday. It was quite hot on both days but I wasn’t remotely tired after either of them due to the steady pace I was running at.

I arrived at registration about 8:05pm on Friday night. My train from Leeds to London Kings Cross had been delayed and despite my best efforts to run from the station with all my luggage, I was unable to get there for 8pm when it as meant to close. Luckily they weren’t bothered about this and gave me all the usual pre race kit.

I arrived about 45 minutes before the start yesterday morning and dropped off my luggage to be taken to the half way point and then the finish. Apparently even if I didn’t want anything out of this at half way, I still needed to check it and ask them to take it the rest of the way?!

I had found something called the 10 commandments of endurance a few weeks ago so spent some time rereading this on my phone to kill time before the start. 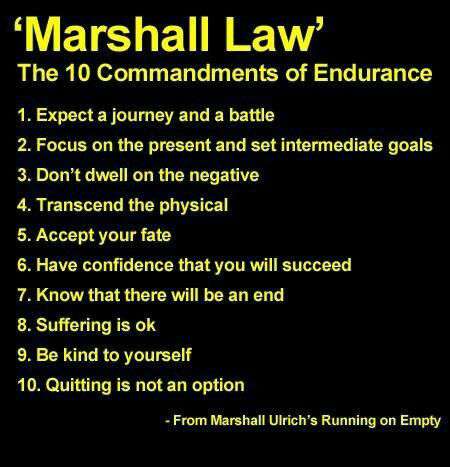 After some cringe-worthy flirting by the race director towards one of the female runners in the pre race briefing, apparently her BMI (Body Mass Index-a ratio of weight/height) was quite admirable! We were told there would be a short warm up with dynamic stretches.

The warm up was good fun and I felt more relaxed at the end than some of the faster warm ups you get at shorter races.

At 6:30am we were sent off through the streets. There was an abundance of evidence that parties from the night before had spilled out onto the water front, every 50 yards or so there was empty bottles, cans and glasses. In addition to this, the small bins were all overflowing. I made it to the first checkpoint around 7:45am and had a rather large pastry along with some water. For purposes of morale, I had decided to have a photo with some marshalls at each checkpoint. The woman overseeing the bakery was the same who had helped me at registration so it was nice to see a familiar face. 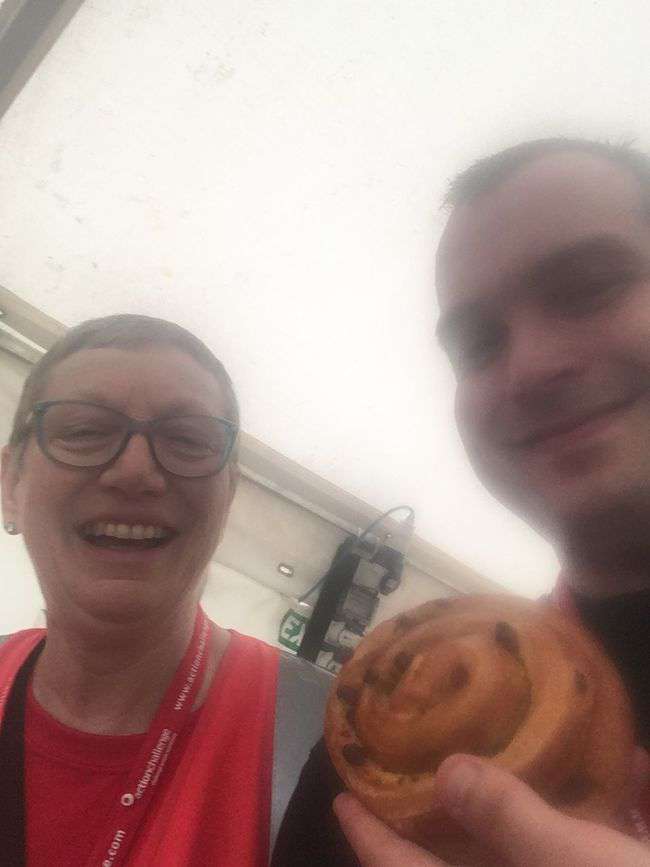 I spent most of the time heading towards the next checkpoint running with a woman called Toni. She had a similar style of driving her arms to me and being able to have a conversation certainly made this leg pass a lot faster. I ran on ahead for the last few miles and made it to checkpoint 2 just before 9:30am. The backpack I was wearing had rubbed against my lower back so I applied some Vaseline to prevent it getting any worse. Continuing with my plan for photos with marshalls, I managed to get the whole medical team to join me at the sign for a group photo. 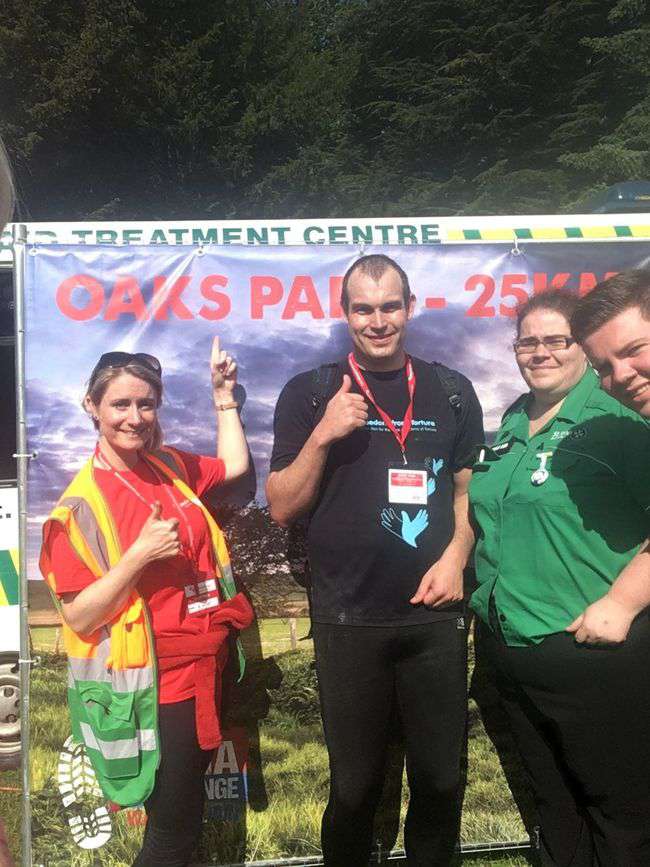 I was really aiming for under 15hrs for my finish time and had roughly calculated what would be the best time to reach each checkpoint by in order to achieve this. Apart from being quite dehydrated for the last few km of this leg, I managed to reach the 40km checkpoint just before noon and had another Marshall photo after eating the best honeydew melon I have had in my life, headed back out to start the longest stage between checkpoints (16km). 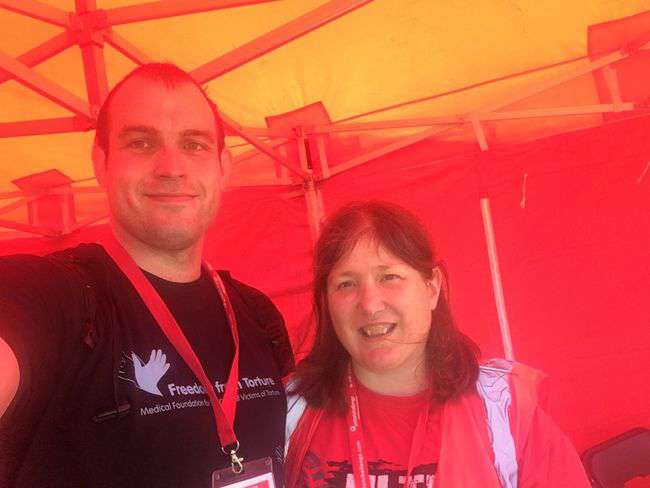 My plan had been to have a short rest at 48km and drink all of my water. I honoured the first part of this plan, but didn’t take my rest as I was very keen to reach the next checkpoint by 2:30pm. Toni caught up with me for the last few km of her race, which was great to have the company for. It was slightly earlier than expected when we reached the 56k “half way” point. I continued with my plan to have the photos with marshalls and talked Toni into joining in this one. 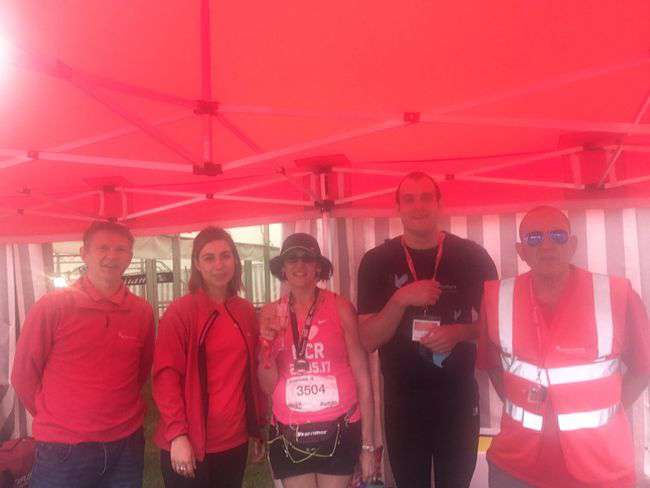 After giving Toni a hug and congratulating her on finishing, I had some lunch of vegetable curry and 2 naan breads, then headed out to start the next 11km leg.

I had brought headphones in order to hopefully listen to TalkSPORT radio at this point to find out how the Aviva Premiership rugby final was going. Unfortunately there wasn’t any mobile data signal so I had a choice between listening to one of the many (105) audiobooks on my phone or the one song in my ITunes library (Fight Song by Rachel Platten). I chose the latter. Luckily for me, the lyrics to this are quite positive and confidence building. 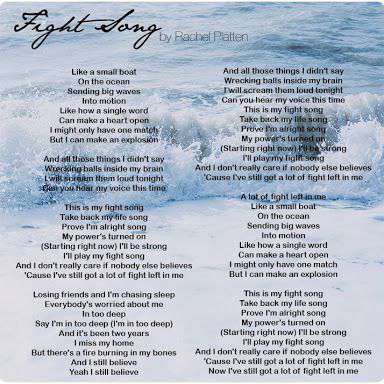 After listening to this on repeat for a ridiculously long time, I reached the 67km point just before 4:30pm. I had copious plastic cups of coke and was very happy to see one of the marshalls replenish the supplies I had made a serious dent into! 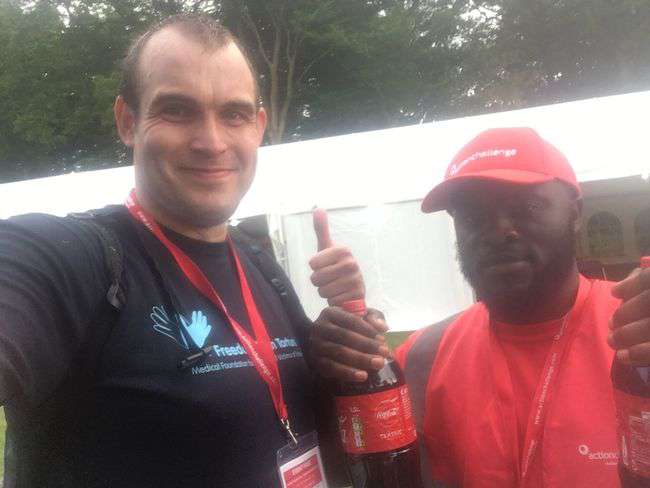 Since February last year, I have had a bit of a chip on my shoulder about not reaching 50 miles in 12 hours on the Last One Standing race in Belfast. The 13km before the 80km checkpoint was certainly the most enjoyable of the whole race. I was able to really enjoy running at a sustainable pace for all of it. This is definitely attributable to a mixture of caffeine and endorphins coming out of my ears! There is a Mindy Kaling quote about endorphins, which i think is true for runners of all abilities. 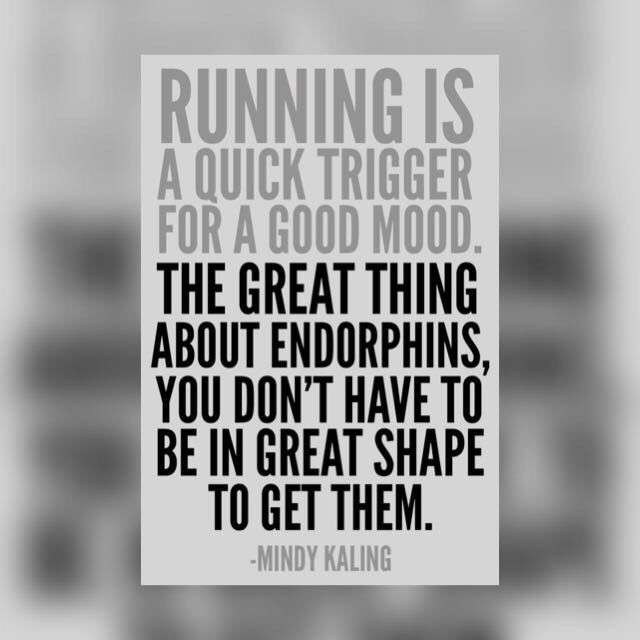 15 months is a long time to be disappointed with how a race finished, I was able to maintain a pace that got me to the 80km checkpoint well under the 12 hours. I had some more melon and took another photo with the marshalls 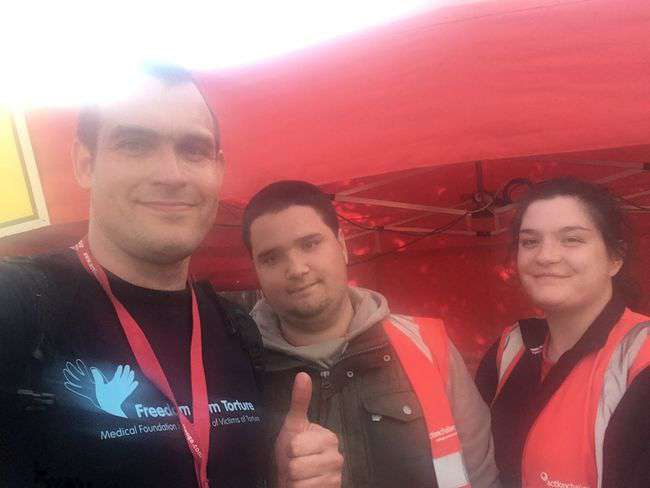 I plodded on at the same pace until the next checkpoint and was still optimistic about scraping in under 15 hours. There was a hill I had dreaded going up since it came into sight about 4km back so barely spent any time at the 88km checkpoint as I wanted to get it out of the way. I had a quick photo with the marshalls and headed back out. 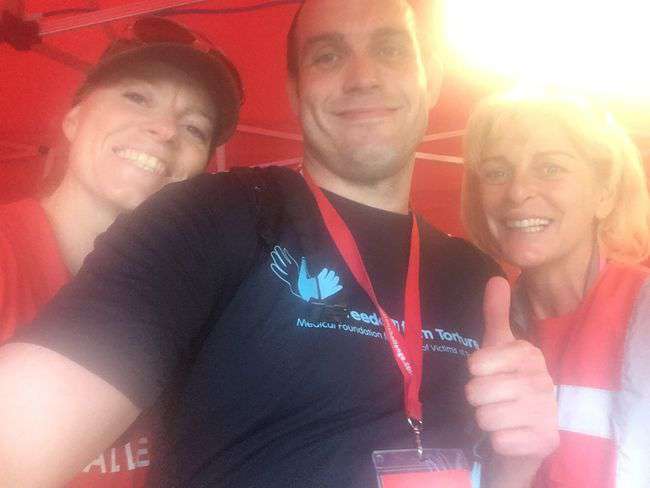 I don’t mind straight hills but despise long winding ones where the summit is never quite in sight. After countless bends, I eventually reached the top but couldn’t get into anything resembling a running motion until the next checkpoint. My legs and lower back were seizing up with cramp if I accidentally kicked a stone, stood still, took my backpack off to get a drink, basically anything that wasn’t forward momentum at a slow consistent stride length. I fell over about 91km and another runner kindly supported me to be upright again by means of a bear hug and advising me to straighten my legs as he did this. I persevered to the 94km checkpoint but lost out on a sub 15hr finish from having the issues with cramp leading up to it. Both marshalls here were up for joining in photo time and I had some more water before heading out for the last 6km. 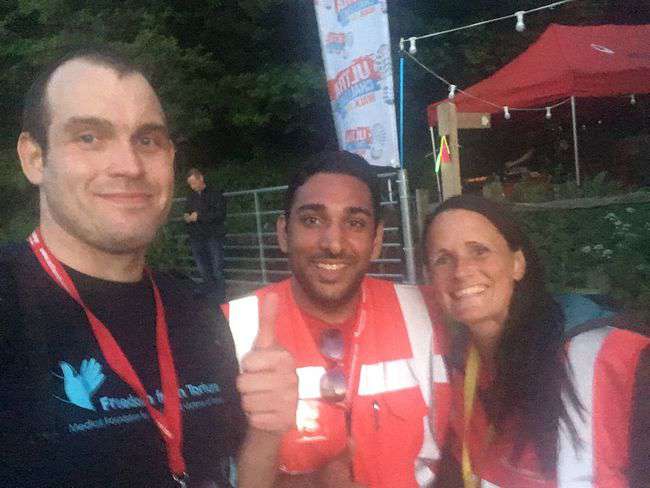 I got a call from the hotel I had booked saying their latest check in time was 10pm so they were leaving my keys and room information at a neighbouring hotel. The cramp in my legs subsided for the last 5km and I was able to stumble along to the finish without breaking stride. At 97km, I gave into darkness and put my head torch on. The last bit involved running along the side of the horse racing track. I’ve never followed the sport so had no idea how long furlongs were (1/8th of a mile apparently). There was 4 of them separating me from the finish. I tried to do a bit of a sprint at the end but this was little more than a change in facial expression!

I had one last photo with a marshall at the end. This was quite cathartic and felt just as much like finishing as crossing the line had! 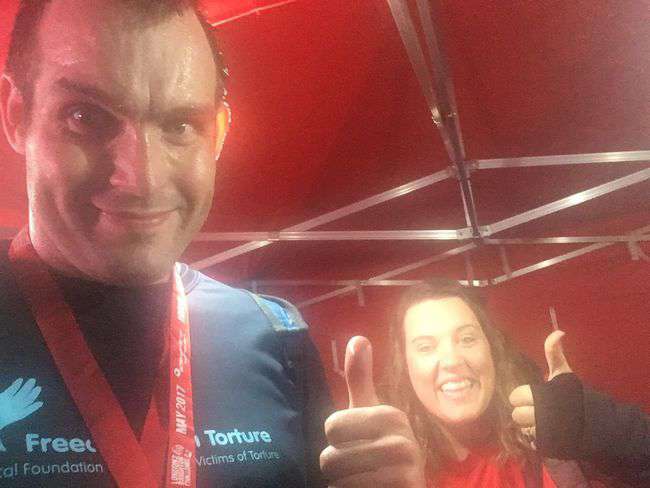 I am pleased to have finished the race and proud to have ran the last bit considering how bad I felt earlier on. It’s always positive to be able to find that extra burst of energy when it appears to have forsaken you.

In terms of future plans, I have signed up for the St Illtyd 100km ultra at the start of May next year. This is a hilly course with a generous cutoff so I should be able to get under that with appropriate training. Having volunteered at the same event a few weeks ago, it will be good to see the race organisers again and if the marshalls are as supportive as they were this year, I think I’ll stand a good chance of finishing.

This week’s running has been one of the best weeks in recent memory. I covered a lap of 5.4 miles each on Tuesday and Wednesday mornings. I then did a morning and an evening lap of the same route on Thursday and finished the week with... Continue →