13 weeks to go, 35 miles and a consistent recovery week

Similar to how my training started last week, I had my 2 rest days consecutively again on Monday and Tuesday. The Relentless Forward Progress plan called for 35 miles this week so my focus switched from the exact distance for each day to purely covering that over the course of the week. I managed 4 miles on Wednesday morning and was pleased to be able to block out how resistant all of my lower body was to moving to finish the route. There is a main hill in the 5.4 mile and. 7.5 mile routes I usually do that I seem to miss when running routes locally and they aren’t in them.

On Thursday evening I scraped under an hour again for 7.5 miles on the treadmill. It was quite pleasant watching it get dark from the floor to ceiling windows in the gym. This served well as a distraction and overalls this was less exerting than the same run last week.

I headed out on the 4 mile route again on Friday morning and this was considerably easier than Wednesday, The 2 small hills in this route were ascended far quicker which made the rest of the run more comfortable.

Having missed out on any real uphill running midweek, it was imperative that I included this for the weekend running. I did the 5.4 mile route on Saturday morning. I really enjoyed being able to surge up the main hill. There was another runner who was going reasonably fast at the bottom of the hill and, while I am fine with other runners flying off ahead on flat roads, I found it motivating to ensure I didn’t get dropped going uphill. When I got to the top, it felt like my heart was going to explode out of my chest and my breathing was all over the place. Understandably, he flew off ahead once the road flattened off again but I was pleased to not get overtaken on the ascent and managed to regain some composure and stability for the last mile.

I did 2 laps of the 7.5 mile route this morning. This was very different to what I expected, usually I find the first lap of longer training runs quite comfortable and then later laps more difficult. Today the first lap was soul-destroying but the second was far easier. I was pleased to manage both laps without feeling that it took anywhere near as much out of me as the 24 mile run from last week.

The difficulty I can have with recovery weeks like this is that it can feel like the training runs will not make much difference to the race I am training towards. I had finished the Grit audio book by Angela Lee Duckworth last week and there was a part of it that stuck with me this week. It is called the parable of the bricklayers and is a story to illustrate how passion and enthusiasm for something can change how people view it. It goes as follows

Once there were 3 bricklayers, each were asked what they were doing.

While I have felt at times this week the individual efforts are not intense enough to make the difference I’d like them to, I have enjoyed having in the back of my mind it is going towards my “cathedral building” which will have been 11 months in the making once it is finished 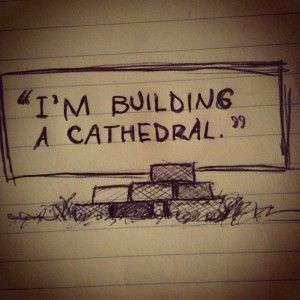 43 weeks, 37 miles and a reminder about delayed gratification

I really struggled for motivation this week. I found the midweek running difficult to gain any enthusiasm for. I think this was because I wasn’t fully recovered from last weekend’s long run. Nevertheless I forced myself out of the house... Continue →